Is Britain Becoming a Hiber-Nation?

Brits are choosing to huddle indoors, hibernating throughout the winter

months, a new study has revealed.

‘Theres no such thing as bad weather, just inappropriate clothing’ is a famous quote you’ve likely heard before, but the spirit of adventure that inspired that quote may be lacking in today’s Britain.

GO Outdoors recently comissioned a survey of over 2,000 adults in the UK where we found that more than half of working adults spend less than 30 minutes outside a day in the fresh air, with 83% barely seeing any daylight at all due to leaving for work before sunrise and coming home after sunset during those shorter winter days.

Managing that work/life balance is difficult at the best of times, perhaps even more so in winter where excuses are often easier to come by. Survey respondents cited: poor weather (62%), illness (23%) and being tired (16%) as the main reasons for not going outdoors in colder months.

Fresh outdoor air and exposure to green spaces can have numerous health benefits, as well as helping you to de-stress and sleep for longer. A lack of time outside can mean it’s difficult to top up your Vitamin D levels with 49% of those surveyed reported suffering from Vitamin D deficiency symptoms. Including fatigue (25%), depression (17%), chronic pain (13%), and overall weakness (13%).

Despite over half (54%) of respondents feeling guilty about not spending enough time outdoors, four in ten (40%) considered walking for up to 30 minutes as too long. Almost half do not exercise (46%) at all, when the NHS recommended amount is two types of physical activity each week.

This is why at the start of 2019 GO Outdoors launched the ‘GO Outdoors challenge‘ which features 7 challenges that can be tailored to your own level of experience including the challenge of ‘taking time to ease your mind’. 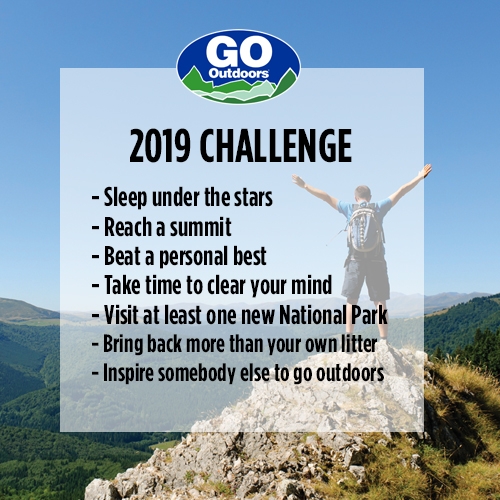 Taking a regional look at the survey respondents, those in the East Midlands and Yorkshire are more mindful and (both 45%) are most likely to feel motivated to go outside to boost their mental health, compared to (34%) in the North West where they were least likely. The South West were the region most motivated to go outside to boost their vitamin D levels with (42%) of residents saying they would venture out for this reason.

Conversely, Londoners are most likely to hibernate and be put off going outside by cold winter weather, more than one in ten (11%) in the Capital admitted avoidance compared to a national average of just (7%). As a result, London had the highest regional report for vitamin D-related ailments. More than a quarter of Londoners (27%) said they suffer symptoms including, feeling fatigued, (22%) weak and (21%) depressed.

“It can be hard to motivate ourselves to get out and be active in the colder months but it’s important to work daylight and exercise into our routines where we can. Vitamin D deficiency can put you at greater risk of developing conditions such as diabetes, heart diseases, certain cancers and weight gain. Compound this with our lack of exercise and much of the nation could not only have adopted bad habits from hibernating over winter but also bad health with longer term effects.”

While lifestyle changes can often be daunting, making small changes can lead to confidence building results. Take a walk on your lunch break, walk to the next bus or tube station along if possible, take a more active commute to work via running, cycling or walking if realistic. Set yourself achievable goals and keep smashing your targets and turn a lifestyle change into simply your lifestyle.

About the research
An online survey was conducted by Atomik Research among 2,002 UK Adults aged 18+. The research fieldwork took place on 15th-18th February 2019. Atomik Research is an independent creative market research agency that employs MRS-certified researchers and abides to MRS code.