There are a million and one reasons to explore the great outdoors of Britain, 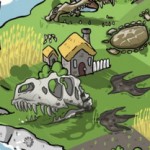 but if you’re looking for a truly thrilling incentive, how about the prospect of finding fossils and dinosaur bones dating back some 125 million years?

Unless you live near a fossil site, you might not even be aware of the important role that the UK plays in the realm of paleoethology, the branch of science concerned with fossilised animals and plants. But just across the Solent from GO Outdoors Southampton, there is a place dubbed ‘Dinosaur Island’ – also known as the Isle of Wight.

The UK’s Very Own Dinosaur Island

That’s right – the Isle of Wight is known for the wealth of fossils that can be found there, whether washed upon the shores, emerging from the chalk cliffs or found in the fossil beds. Types of fossils to be found on the island include dinosaur footprints and dinosaur bones, but also reptiles, crocodiles, turtles, fish, shellfish and many more!

Together with Red Funnel, the ferry service between Southampton and the Isle of Wight, GO Outdoors has sponsored the Guide to Fossil Hunting on the Isle of Wight, which features the best fossil beaches on the island along with preparation tips, information about legalities, a list of guided fossil walks and an illustrated overview of the types of dinosaurs that used to walk these grounds.

Types of Dinosaurs Found on the Isle of Wight

Species of both orders of dinosaurs, ornithischia and saurischia, have been found on the Isle of Wight. In the ornithopoda suborder, discoveries range from small bipedal animals such as the Hypsilophodon foxii (named after the late fossil collector William D. Fox), which reached up to 1.8 metres tall and weighed about 20 kilograms, all the way up to gigantic creatures such as the Iguanodon bernissartensis, which measured around 10 metres long and weighed a whopping 3.08 tonnes!

In the Sauropodomorpha suborder, the ‘Barnes High’ sauropod is one of the most impressive species and an almost complete skeleton can be found at Dinosaur Isle, the Isle of Wight’s dinosaur museum.

For an illustrated overview of the types of dinosaurs found on the Isle of Wight, download our fossil hunting guide.

Anyone Can Find Fossils!

Over the course of many years, a multitude of dinosaur bones have been discovered by dinosaur experts and amateur fossil hunters alike on the Isle of Wight. Back in 2007, a six-year-old boy unearthed the 120 million-year-old bones of a pterosaur while on a family holiday, and in 2013, a nine-year-old fossil hunter called Daisy Morris even had one of the flying beasts named after her! In 2016, a mother-of-two uncovered an ‘incredibly rare’ fossilised Iguanodon skull during a guided fossil walk with Dinosaur Isle.

On top of these major discoveries, tourists and locals alike find fossils on the Isle of Wight’s beaches on a daily basis. Anyone can find fossils – all it takes is some preparation, a bit of luck and the right fossil hunting kit!

Are you ready to go on a great adventure 125 million years back in time? Download the Guide to Fossil Hunting on the Isle of Wight to be off to a flying start – just like a pterosaur!