#GOCycleChallenge for BBC Children in Need

This year GO Outdoors has committed to being an official retailer of the BBC Children in Need Official Ramble Hat as well as doing all we can to help raise vital funds for those that need it the most. There are plenty of fundraising activities going on across office and stores in the buildup to Children in Need night, including a 923 mile stationary bike challenge at GO HQ.

Mike Sanderson of Calibre Bikes laid down the challenge to all the colleagues at GO HQ to take on a mammoth cycle challenge in a bid to raise money for the charity, something we were all too eager to get involved with. It was decided that we would take on the mileage from out southernmost store Plymouth, to our northernmost store Inverness, and we couldn’t leave out Wales and Northern Ireland, so we went via Swansea and Newtownabbey. According to Google maps, the route would total 923 miles on national cycle routes. We had to hit this within a single working day. The challenge was set. 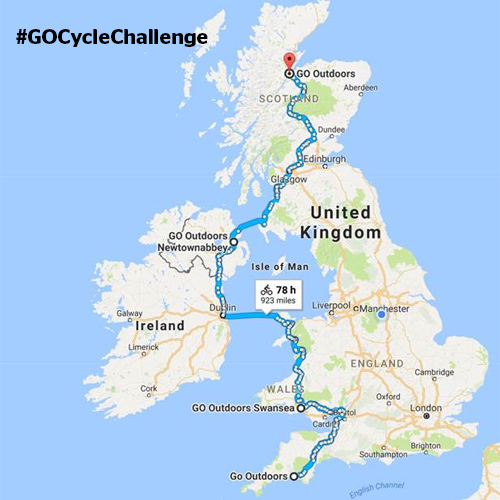 We asked GO colleagues to pledge as many miles on our stationary bikes as they could handle, making it a stationary bike challenge meant that challenge was open to everyone of all cycling abilities, from our hardcore cyclists to those who hadn’t been on a bike since they were young. The pledges came rolling in ranging from 5 miles to 100 miles.

The Day of the Challenge

The early peddlers arrived at 8am to get things started. We had 8 bikes, most of which donated from Calibre for the challenge, all set up on TacX turbo trainers which were kindly provided by ZyroFisher, and the mileage would be clocked by Garmin cycle computers provided by Garmin themselves, just to make sure all the mileage was properly tracked. 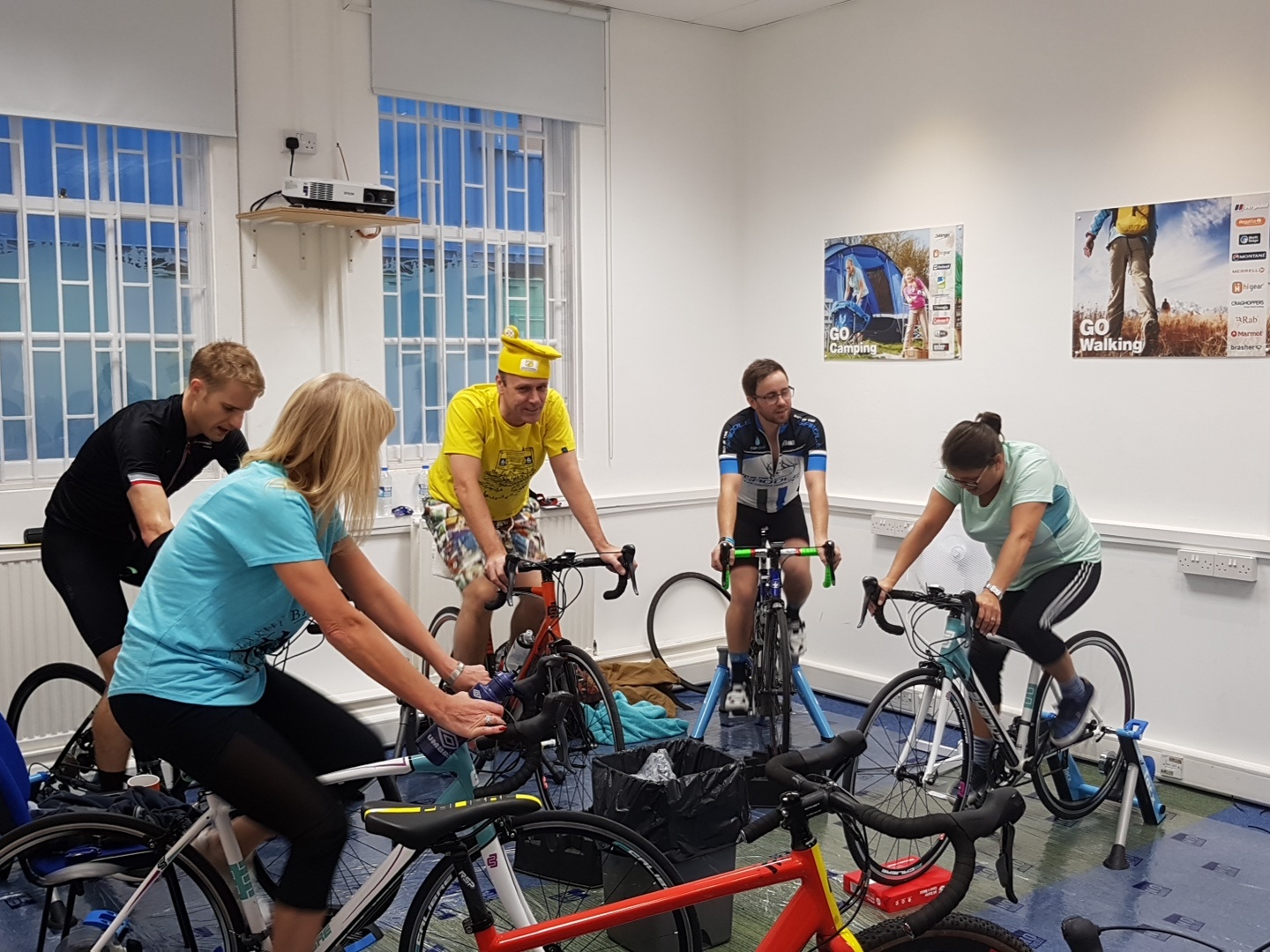 Throughout the day more and more people hopped in the saddle to cycle out their miles, before tagging in another colleague. Plenty of people were pushing through their initial pledges and clocking more miles. Without the scenic views of road cycling though, we knew we had to keep the bikers motivated through the day – so we organised some special activities to keep them going.

9AM Spin Class hosted by our very own ‘Mel Motivator’

You’ve pledged your miles, you’re challenging yourself – what more could you want than a surprise spin class? Check out our Facebook live footage from the day:

Is there anything more motivating than somebody with a glorious moustache yelling in your face? Probably not. Any striking resemblence Drill Sergeant Brown has to our very own Brown who had clocked 50 miles through the morning is entirely coincidental.

3PM The 100 Milers host their own Spin Class

Mike from Calibre, and Karl of our IT team had both clocked up 100 miles for the challenge in the morning. They were tired, their legs were shot, but they couldn’t wait to host a brutal spin class for everyone in the afternoon, Mike even got back on the bike in his best spin gear.

We are delighted to say that we hit our 923 mile target early thanks to the effort of the cyclists, but there were still miles being pledged, and the team continued until the 4:30pm deadline. We finished on 1143 miles! A huge thank you to the whole team for putting the effort in.

We kept you all updated via our social channels through the day, and asked for your donations and we were delighted with the response. We smashed our £5,000 target thanks to customers, family, friends and suppliers all digging deep for a great cause.

The Fundraising doesn’t stop there!

Our stores are hosting their own events in the run up to Children in Need, plus you can still grab the Ramble Hat for just £6 with all proceeds going back to charity.

Stay tuned to GO Outdoors on social media to keep up with some of our other fundraising efforts in the build up to the big night.