Andrew White from Walks Around Britain shares why he goes outdoors

We continue to celebrate the different reasons for adventure this year with #iGOoutdoors, you can submit your adventures and stories by tagging them #igooutdoors on your social channels, more info available at http://www.gooutdoors.co.uk/igoutdoors .

This week we sat down with Andrew White, the man behind ‘Walks Around Britain’ to find out how he’s using his love of the outdoors to encourage others to give it a go.

Walks Around Britain bring accessible walks up to 8 miles in distance ideal for walkers of all abilities.

Q. For those who may not know, what is Walks Around Britain and what inspired you to start it?

A. Walks Around Britain is many things, it’s a website, TV series, podcast and a range of social media accounts which are all focused on one thing – getting people out onto short walks.  It came about after watching Julia Bradbury’s Wainwright Walks TV series in 2007, and thinking this is all well and good, but I’m not going to be able to get my 4 year old out on those.  And also, I had a belief for a while that the constant obsession the outdoor industry has with mountains could well to putting people off getting outside if they perhaps thought walking means mountains.

I took a few years to research this, and the more I chatted with people who didn’t go walking, the more the same comments kept cropping up… “I’d love to go walking but I live in a city”; “I can’t go far and walking is all about long-distance trails”; “I’d need all that expensive kit”; “Mountains scare me”…  So in 2010, I started Walks Around Britain as a website with the idea of having 10 minute videos on there to show people what they could expect on a particular walk – and I wanted to make them so as many people could get out and actually do them.  That’s where our distance limit of 8 miles came from – which I thought was perhaps the limit of most people’s walking, and that made them all suitable for a Sunday stroll.

These days, the small team here make a large website, regular podcasts, have many conversations on our busy social media accounts and produce a TV series – all dedicated to short accessible walks.

Q. Walks Around Britain has come a long way in that time and can now be found on TV and Amazon Prime now, what makes it different?

A. We don’t just concentrate on walks which have a great view… if they do, that’s good, but we’re mainly interested in stories.  So that could be the story of the landscape the walk is going through, or the story of a person who is coming on the walk along with the presenter.  That makes it different, as we can go to many places which people wouldn’t necessarily think about going walking around, and show them it’s interesting and worthwhile.

And because we feature non-typical walking places, it attracts a lot of people who might be able to be persuaded into going walking but who would put off if it was all up hills and in the Lake District.

We try really hard for it to be an accessible programme, so you don’t have to be an established walker with all the gear to enjoy it – in fact we want to talk and inspire those people who don’t see themselves as walkers really; to inspire them to get outside and discover our wonderful country. 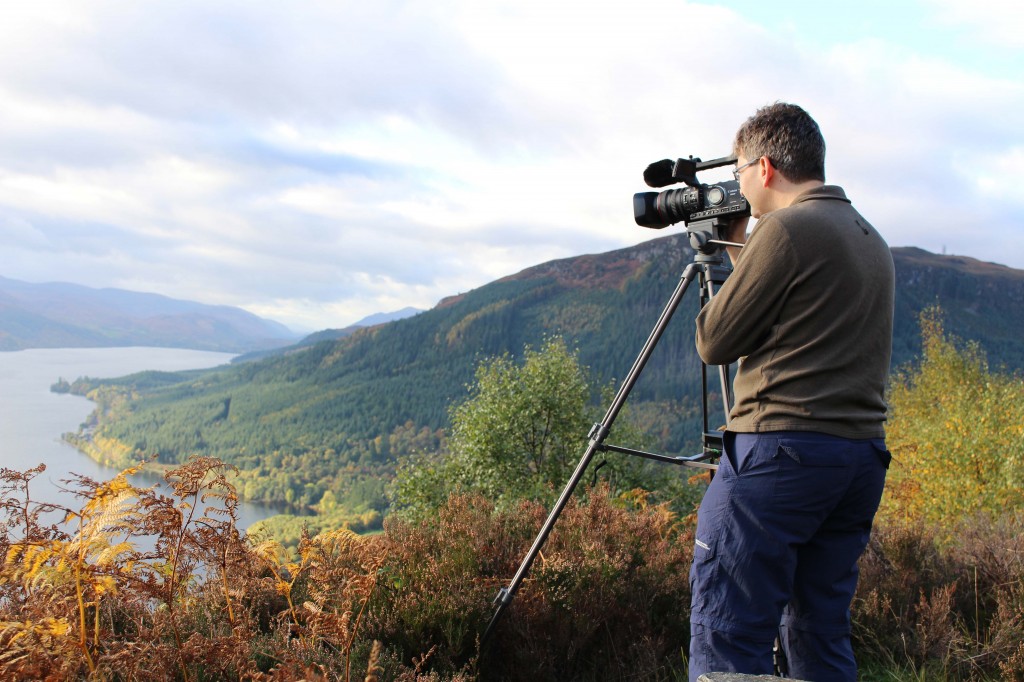 Q. Where did your own love for walking and the outdoors come from? Was there somebody in your life who introduced you to the outdoors?

A. It came from my parents and in particular my Dad.  He was mad keen on railways – which is where I get my passion for trains from – but he loved history and heritage, so our weekends were spent visiting castles, old houses and the like.  Together with regular holidays in North Wales, that’s where my appreciation for the great outdoors was born.

Q. You walk every mile of every walk that you feature – you must hit totals like the walk1000miles challenge each year?

A. Yes, it’s important to me that I know each of the walks in the series, so I make sure I walk every route we feature – even if I’m not presenting it.  Only that way can I know what to tell our viewers about.  I mostly walk the routes at the same time as filming them, but sometimes we have to film in a different order because of guest availability or some camera requirement, so I might not be walking the whole route whilst filming on that occasion… but I’ll have already walked it beforehand anyway.  I think there’s an expectation in telly that the presenter gets airlifted off to the next point… well, I can say in our series, that certainly doesn’t happen!

As for distance, last year I walked around 2,000 miles – when you take into account walking my three dogs as well.  This year I’m writing four walking guidebooks as well as filming two series of Walks Around Britain, so it will be a fair bit more!  The thing about filming for the series is the walk we’re featuring might be 5 miles, but by the time I’ve walked away from the camera so I can walk back towards it talking, and so on, I end up walking 15 miles in total!

Q. You’re an avid campaigner of encouraging kids to go outdoors more, and you even take your own children on some of the walks you feature – how important do you think it is to get the whole family involved in the outdoors?

A. Oh massively important. We’ve got a crisis of our growing obesity problem in the UKs school children, with nearly 20% of children classed as obese by the time they get to year six.  We’ve also a growing mental health issue in children, with seemingly three children in every secondary school classroom has a diagnosable mental health problem.  And at the same time, nearly 10% of children have not set foot in a park, forest or on a beach for at least 12 months.  Now, maybe, just maybe, there’s a bigger link between all of these issues than we realise.  If we got our children out more in to the great outdoors, we can reduce the number of children with obesity – and all the health problems being obese can bring; we can improve their mental health by taking them away from the often destructive world of social media;  and we can connect them back to nature to rebuild the bond humans should have with their surroundings.

Q. What advice would you give to a family looking to get out walking more?

A. If you’ve got young ones who are reluctant to go walking, then try re-branding it to an adventure or a discovery.  Kids love to go on an adventure!  Also, try to keep the distances short – or, if you’ve got a long-ish walk, try and plan a shortcut, just in case.  Involve them in buying some cool and trendy outdoor gear or maybe packing their own rucksack. Little things can spark an interest.

Q. You’ve recently been nominated an Ordnance Survey #GetOutside Champion working alongside bloggers and adventurers – How does it feel to be working alongside others to inspire people to discover more outdoors?

A. It’s fantastic to be around and in the company of so many amazing people, all passionate in their own way about the outdoors and what they do in it.  Together as a collective, we can do great things in inspiring people to find which bit of the outdoors is perfect for them.

Q. We’ve been talking about ‘Britains Favourite Walk’ recently with ‘Hellvellyn’ being voted as number 1, What’s your own personal favourite walk and why?

A. That’s such a difficult question to answer because my favourite changes depending on who I’m walking with, or the season, or whether I have my dogs.  But the coastal walk between Port St Mary and Port Erin on the Isle of Man is one of my favourites – because it was one of the first I’d filmed on the Isle of Man and I instantly fell in love with the island.  I love my history, heritage and railways, so the walk along the Wales Coast Path from Bangor to Llanfair PG via the Menai Bridge in North Wales is also a favourite because it’s where we went on family holidays, and then completely different but another favourite is Cusworth Hall to Sprotbrough in my hometown of Doncaster – a mainly flat route apart from the hill at Cusworth which gives fine views across the town.

Q. What does the future hold for Walks Around Britain?

A. We’re currently making the fourth season of the TV series, and plans have started for the fifth, so there’s more walks coming soon.  We’re also looking at starting a Netflix-style subscription service, where subscribers will get at least one new Walks Around Britain programme every month for around the same price as a magazine – so we’re excited about that.  We’re also working on a series of DVDs, so there’s plenty to keep an eye out for.

Q. If somebody hasn’t seen Walks Around Britain? Where can they find you?

A. Well, the TV series is shown on 19 channels in the UK, including Forces TV, Horse & Country, Holiday & Cruise TV and Globetrotter TV, as well as around the world on Amazon Prime Video.  You can also get also watch us for free when you travel on Virgin Trains, West Midlands Railways and London Northwestern Railways too, as we’re on their on-board Wi-Fi entertainment services.  You can get the podcast from iTunes or your regular podcast supplier.

What is YOUR outdoor story?