Why the mountain forecast matters to you

Mountain Weather; A guest blog from the Met Office

The GO Outdoors blog is growing in 2014, and part of

that growth we will be bringing you some special guest blogs from experts in the outdoors and associated topics. In this instalment of our guest blog series we’ve asked the Met Office to explain the importance of the mountain forecast and how quickly the weather can change in a mountain range.

Mountains can be inhospitable and dangerous places for the ill-prepared. From one hour to the next, from one hill to the next, they can exhibit a dramatic variation in weather conditions. Whether you are part of a well-planned expedition or heading out on a spur of the moment decision to go to the hills, it is important to check the forecast.

Temperature, wind and rainfall are all influenced by mountain ranges. No matter which direction air comes from, if it meets a range of hills it will have to do one of two things: either find a way through the valleys or be forced over the top.

When air is forced to rise, it always cools. The rate of cooling is not constant, but on average temperature drops by around 2 °C per 300 m (1,000 ft) of ascent. This means that at the summit, the temperature will be much cooler than in the valley. Couple this with the average doubling in wind speed at 900 m compared to low ground, and the overall wind-chill effect on a wet or perspiring human body can be very large indeed. A wind of 40 mph and an air temperature of 3 °C, not an uncommon combination even in summer, will yield a wind-chill temperature of -10 °C.

However, on a day-to-day basis, such potentially dangerous weather is the exception rather than the rule. 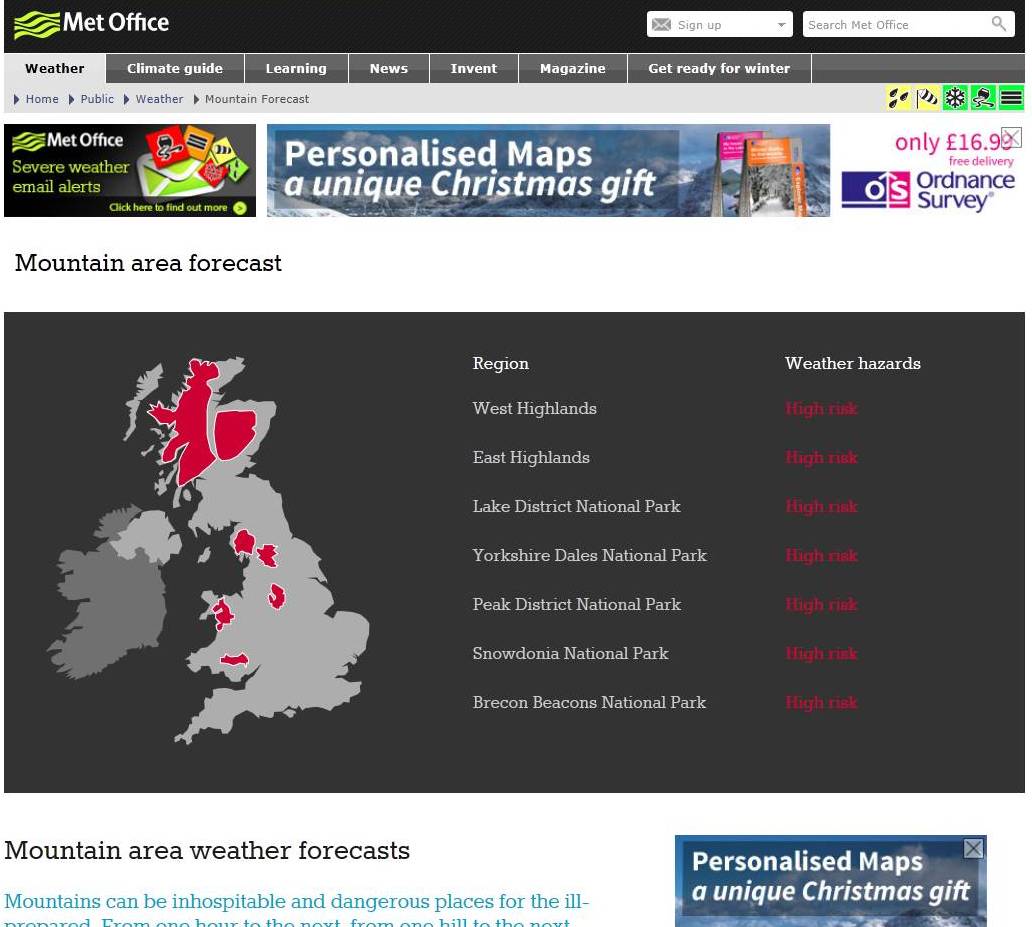 Checking the recently re-vamped mountain forecast from the Met Office gives essential forewarning of the likely conditions on your chosen route. Mountain forecasts are provided for the main mountain areas and those which have the highest visitor figures. We also provide forecast information for all 15 national parks in the UK, as well as the Mourne Mountains in Northern Ireland. Our forecast pages provide detailed information about your chosen region including:

Remember you can always access our mountain forecasts, even while you are out and about, using your mobile phone

Do you have information that would be useful to people in the outdoors?

Do you have a website and want to write a guest blog for the GO Outdoors blog?

Drop an email to blog@goooutdoors.co.uk with some information on the subject you would like to cover.